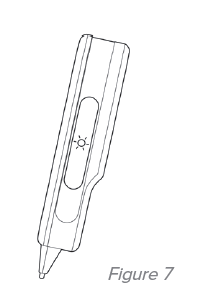 NOTE: Light emitted from the tip of the handheld unit may not be visible. Multiple flashes or multiple tones and clicks may be visible and audible during the recording process.
Do not move the tip until the onscreen instructions direct to record a new location on the lesion.

When the screen of the handheld unit displays “Move to location 2 and press record” and an audible sound is emitted, lift and replace the tip to the next location on the same lesion and repeat the steps until all 5 locations on the lesion are recorded.
NOTE: If the DermaSensor Device does not capture a usable recording (e.g., if there is an area of excessive pigmentation, or if the device detects that the tip is not in contact with a lesion), the display may prompt to repeat the recording.
When all recordings for a lesion have been acquired, the handheld unit will compute the recordings and display a result on the screen.
If the patient is complete, and/ or the device is to be used on another patient, press the <PATIENT COMPLETE> button
To scan another lesion on the same patient, press the <NEW LESION> button on the display and repeat the previous steps. 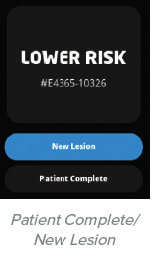